As we celebrate Black History Month, the many scientists, geologists, and engineers at BBJ Group recognize and honor the contributions of influential black scientists and experts in environmental matters who have made our practices possible. This week we celebrate Dr. Warren Washington, an internationally recognized expert in atmospheric sciences and climate research, who specializes in atmospheric computer modeling.

Dr. Washington is currently a Distinguished Scholar for the National Center for Atmospheric Research (NCAR), the culmination of a career spanning over 50 years, studying climate patterns and making significant contributions to our understanding of climate change – a topic near and dear to many of our colleagues, clients, and community members.

Dr. Washington had a love of science back in grade school while growing up in Portland, Oregon and continued to pursue his passion throughout his academic and professional career. Dr. Washington officially began his scientific journey with a Bachelors Degree in Physics in 1958, a Masters Degree in Meteorology in 1960 both from Oregon State University, and a Ph.D. in Meteorology in 1964 from the Pennsylvania State University. At that time, Dr. Washington was the second African-American to earn a doctorate in the atmospheric sciences. He’s held research positions in the fields of meteorology and/or atmospheric research dating back to 1959, and has been a member of NCAR since 1963.

While Dr. Washington is known for many things, his early work in computer modeling is widely recognized as ground-breaking. Working with Dr. Akira Kasahara in the early 1960s, he developed new models that used the laws of physics to predict future states of the atmosphere. An article in Eos, published by the American Geophysical Union (AGU), quoted him as saying they did “simple things” like running models that tested the effects of doubling the carbon dioxide concentration in Earth’s atmosphere, and that “all of the computers had vacuum tubes and were very slow.”

Fast-forward to today, where his models are still used around the world, and incorporate a greater variety of factors, including oceans, sea ice, surface hydrology and vegetation. His publication Three-Dimensional Climate Modeling, published in 1986 and updated in 2005, is still a recognized reference in the field. Dr. Washington has been honored or received awards for his work more than 50 times. Notably, he was among the team of NCAR scientists that won the 2007 Nobel Peace Prize, and then President Obama awarded Dr. Washington the National Medal of Science in 2010. 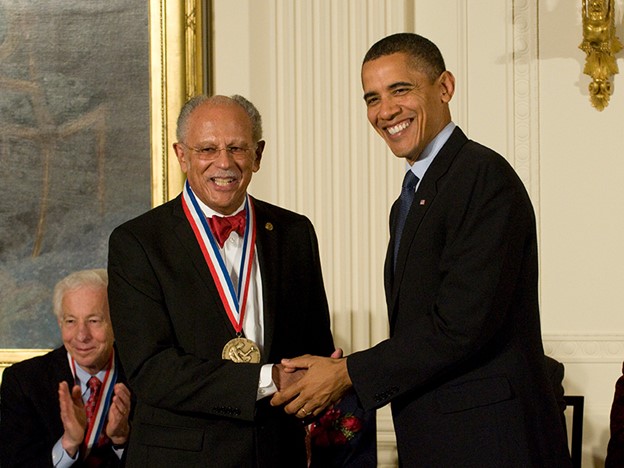 More Than Just a Scientist

Not only has Dr. Washington contributed significantly to the field of climate change, he has spent his career trying to help the next generation of scientists. “Mentoring should be an ingrained part of every scientist,” he wrote in his autobiography, Odyssey in Climate Modeling, Global Warming, and Advising Five Presidents. Dr. Washington lived that belief throughout his life. He has served on or been chair of committees of the American Meteorological Society (AMS) and the American Association for the Advancement of Science (AAAS) dedicated to increasing the number of black scientists in science and advancing the careers of minorities and women. In 1999, he received the coveted AMS Wooden Book Award, i.e., the Charles E. Anderson Award, which is given “for pioneering efforts as a mentor and passionate support of individuals, educational programs, and outreach initiatives designed to foster a diverse population of atmospheric scientists." The AMS has even named a leadership award after him: the Warren Washington Research and Leadership Medal.

Dr. J. Marshall Shepherd, another outstanding black scientist, is quoted in a 2018 Forbes article as saying “Dr. Warren Washington has a transcendent influence on meteorology, climate, and the development of young scientists.” This can be seen in his active participation in the NCAR Significant Opportunities in Atmospheric Research and Science (SOARS) program, which focuses on broadening the participation of historically underrepresented communities in the fields of atmospheric and related sciences. The Department of Meteorology and Atmospheric Science of Penn State University held a 2018 symposium in his honor, celebrating his legacy of mentoring generations of scientists in the field and being a role model for scientists and students of color throughout the United States.

Climate change continues to present itself in many forums and is a hot topic of discussion in many organizations and industries. We thank Dr. Washington for his significant contributions in making such discussions based on scientific modeling and atmospheric data. Dr. Washington’s technical excellence, perseverance of scientific discovery, and approach to educating the next generation of scientists has benefited all of society and we should always celebrate his tremendous achievements to our practice and understanding of the environment that we reside in.

This focus of our second blog celebrating Black. . .