The Marcellus Shale: An Uncertain Future

The Marcellus Shale: An Uncertain Future

The Marcellus Shale is a Middle Devonian-aged sedimentary formation made up of predominantly black shale as well as a smaller amount of lighter shale and interbedded limestone. Its radioactive signature and striking black color makes it easy to spot in the field. Ranging from upstate New York through Pennsylvania to West Virginia, and western Ohio, the formation was one of the first shales to be tapped for natural-gas production, just after the Barnett Shale formation in Texas.

Early estimates in 2002 by the United States Geological Survey in its Assessment of Undiscovered Oil and Gas Resources of the Appalachian Basin Province approximated 1.9 trillion cubic feet of gas in the Marcellus Shale. At a glance it appears to be a large volume, but considering the vast range of the Marcellus, it is significantly less when broken down per acre. The depth of the formation ranges from the surface in central Pennsylvania to over 9,000 feet in southwestern and northeastern Pennsylvania. The thickness ranges widely, with the thickest parts in northeastern Pennsylvania and the thinnest areas in western Pennsylvania and eastern Ohio, until the bed is pinched out near the Cincinnati Arch. While the formation itself is relatively thick, it is divided into several members and farther to the east those members can be even further divided. 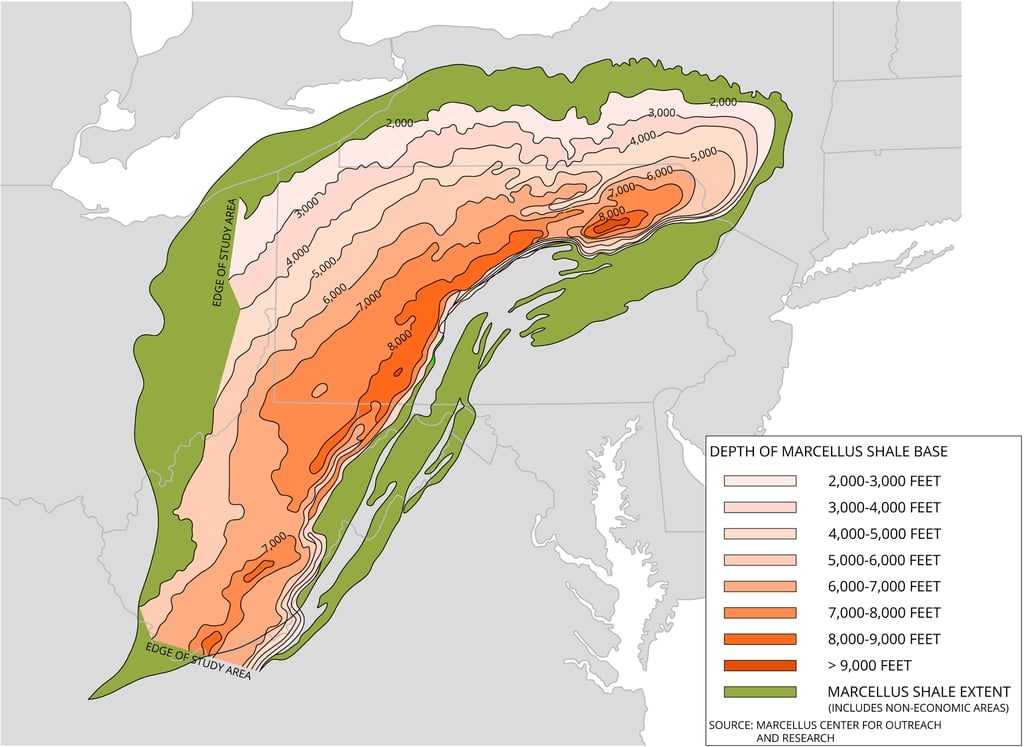 There are three ways gas can occur in the shale: 1) in the pore spaces; 2) within the vertical fractures or joints that break in the shale; and 3) through organic material or mineral grains. It is natural to assume that more recoverable gas will be present with higher amounts of organic material. Since most of the recoverable gas is in the fractures, horizontal drilling can be used to access more fractures. Another method is to increase the number of fractures by using the hydraulic fracturing method that uses high-pressure gel or water to create fractures in the rock around the well bore to recover larger amounts of gas.

In 2003, Range Resources drilled a well in the Marcellus Shale in Washington County, Pennsylvania, and successfully found a natural-gas flow. After experimenting with horizontal drilling and hydraulic fracturing methods that had previously worked in Texas, the first gas production from the well began in 2005. Between 2005 and 2007 over 375 wells were permitted in Pennsylvania with the intent to produce gas from the Marcellus. For a well to be successful the yield must be higher than the cost it takes to drill and extract the gas, which can easily exceed several million dollars (2015 estimated cost was $6.1 million). This can also prove difficult as the rock unit is not homogenous and the gas contained is a result of the non-uniform organic content in the formation.

Once drilling had become successful, more attempts to approximate how much gas was in the Marcellus Shale began again. Estimates have ranged all over the spectrum, from 500 trillion cubic feet with only 10% recoverable, to 410 trillion recoverable and most recently 141 trillion cubic feet of recoverable gas. While this last estimate leaves about six years’ worth of natural gas for the United States, many companies have gone to great extents to invest and produce from the Marcellus Shale in the past decade. The Marcellus was yielding approximately 14.4 billion cubic feet of natural gas per day by early 2015 and was the source for over 35% of the shale gas produced in the United States and 18% of the total dry gas production in the United States. Marcellus drilling has affected approximately 15,400 acres of land in Pennsylvania, which is only about 0.5% of the total land in the commonwealth.

The Pennsylvania Department of Environmental Protection (PADEP) reported that the number of wells has increased rapidly since first production, dropped off, and has since leveled out to a more consistent number. Over 46% of the total unconventional wells in Pennsylvania were drilled between 2010 and 2012 and over 70% drilled between 2010 and 2014. In 2016 alone 504 unconventional wells were drilled, which was only a quarter of the 1,956 wells drill in 2011, generally considered the peak of drilling. However, the Marcellus remains a productive formation even though the number of new wells has declined. Eventually, it will most likely follow the Barnett Shale in Texas and the formation will go into decline as the peak production years pass. It should be noted that production from wells is only half the equation, since the cost of drilling must be offset by the amount of gas extracted from each well and the price of natural gas.

The long-term yield of Marcellus Shale is still uncertain and experts are split on projected outcomes. While some parties believe there will be lower but still profitable production for decades, others believe that new technologies will need to be implemented and old wells re-drilled in order to produce profits, and some still see a possibility of drilling from the same surface pad but in multiple horizontal directions. For now, production still continues, but the number of wells in existence has flatlined since 2016 and appears to remain stagnant in the coming years.