April 1 is an important date for assessing California’s water conditions. Among other activities, this is the day that the California Department of Water Resources (DWR) conducts its spring snow survey to assess the depth and weight of snow and thus water content available in three key sections – north, central, and south - of California’s primary summer water container - the Trinity/Cascade/Sierra Nevada mountain complex[1]. The results of this Spring’s measurements are anticipated to be published as Bulletin 120 by DWR in mid-April.[2] April 1 also is the day of the annual lake level measurement at the ancient but critically important Mono Lake – the high elevation (7,000 ft. above mean sea level), saline, ecologically critical eastern California bell-weather that, in-part, is used to determine how much water can be redirected from Mono Lake’s Sierra Nevada-originating recharge tributaries and exported 300 miles south via the Los Angeles aqueduct to supplement L.A.s water supply[3]. Even before knowing the results from the April 1 measurements, acknowledgement exists that California is in a low water condition as confirmed by a review of this year’s precipitation which shows most of the state at substantially less than 50% of typical and most reservoirs filled to a low percentage of capacity.[4] 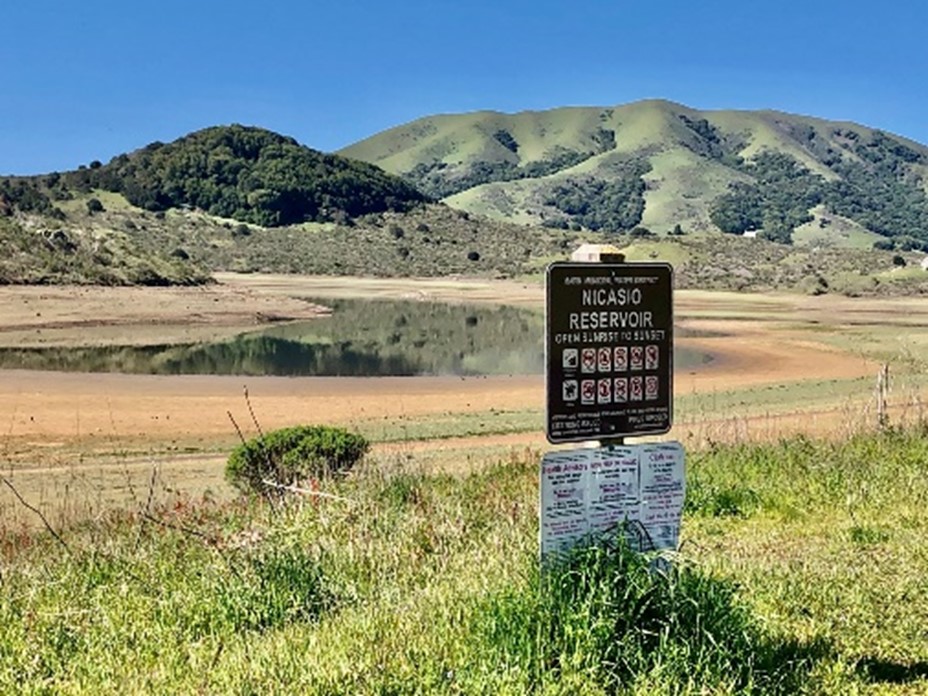 Furthermore, both DWR, which manages water deliveries to users from the State Water Project system of aqueducts and canals, and the U.S Bureau of Reclamation which manages the Federal Central Valley Project system of aqueducts and canals, have sent notice that deliveries this year will be only a few percent of the total volume requested.[5] [6]  So, the question becomes, will 2021 be similar to what we’ve lived before – a déjà vu all over again (as Yogi Berra once quipped), or will it be more like the movie Groundhog Day where we, like the character played by Bill Murray, have a chance to act differently, yet again, under an historically similar set of events.

Most water delivery agencies or districts in the State make regular assessments of its conditions and manages the supply to assure that anticipated water deliveries can be made. The East Bay Municipal Utility District (EBMUD), which derives its water supply primarily from a combination of snowmelt and rainfall within the Mokelumne River watershed in the Sierra Nevada, plus local runoff (and supplemental Sacramento River water in dry years), services the eastern SF Bay area and is reporting that its system storage as of late March 2021 is better than 70% of capacity even though annual to-date precipitation in the system’s watershed is less than 60% of typical[7]. The Marin Municipal Water District of coastal northern California, an area that is supplied by precipitation only with no snow melt is reporting its storage only at about 55 percent[2] - a condition this author considers optimistic based on a personal late March observation at a key storage reservoir (see photo of Nicasio Reservoir in western Marin County). The low water conditions also have again made national news – for example, the recent New York Times[3] article not only provides commentary on the paucity of the annual water supply but also anticipates a quick return to a period of devastating major wildfires, which as we know, also brings dramatically challenging air quality conditions as we saw just a few months ago in August, September and October 2020. (See leading photograph of the Bishop Lakes area from October 2020) 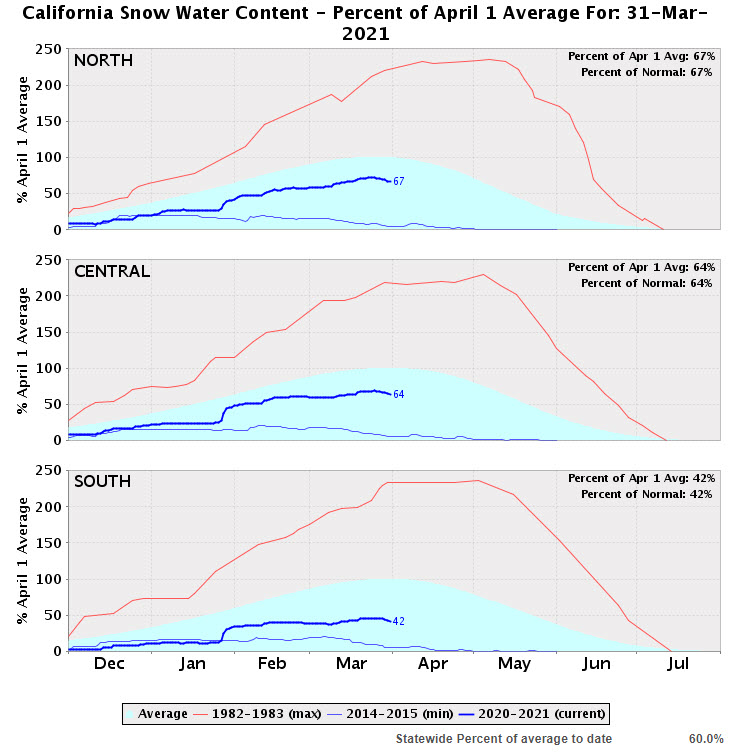 The annual water condition dance in California is a regular part of life here in the Golden State. Compared to historical information, this year’s water condition, based on a qualitative view of snow survey graphs, appears quite severe, though not yet as dire as the conditions we saw during the historic 2014-2015 period (Figure A). Now consider that California, with America’s largest state population (approximately 40 million residents), and largest gross state product (over $3.2 trillion in 2019 that also would have placed 5th largest among all countries based on 2019, pre-pandemic statistics)[10] has developed largely because of the comprehensive and complex surface water distribution system built through much of the 20th Century – a water system that moves water from areas of high annual precipitation in the north and high alpine regions to the coastal (San Francisco), central (Sacramento and San Joaquin Valleys) and southern (Los Angeles and San Diego) urban areas of the state (note that the State’s surface water supply also is partially served by transfers from the Colorado River, local aqueduct systems, and a growing sea water desalination program.

The importance of water resources, including groundwater, to California, which arguably is the most hydrogeographically and climatologically varied state in the U.S., touches nearly every aspect of environmental, ecological, agricultural, industrial, economic and domestic need. From the water needs for manufacturing aerospace and automobile parts, consumer goods and pharmaceuticals, recreation including snow making for ski resorts in low snow years, to the global bread baskets that are the great agricultural fields of San Joaquin, Sacramento, and Salinas Valleys, to the use of water for energy development and for heating and cooling in the gig-economy, to the microbrews and family vintners, aquaculture businesses and more, water drives California’s economic and environmental livelihood. Issues around water reliability and vulnerability also are critically important in assessing business and property transactions in diligence projects, particularly where water security is a major facet in the long-term success of a business entity.

That critical and extended drought impacts to aquatic, forest and watershed lands is seen in the severity of firestorms and the resultant increase of sediment off denuded land into aquatic systems and reservoirs is an obvious concern. But it is also the non-direct impact of drought and infrequent exceptional storms (including atmospheric river events which sometimes are more severe during long-term drought cycles) that affect the occurrence, distribution, and attempted remediation of environmental pollutants. We must use technical knowhow and remedial design to mitigate the potential impact of a “first flush” conditions - that is, the force of an exceptional rain event following months or years of drought to move (or flush) roadway, pavement and burn-area particulates and pollutants, and both legacy and emerging contaminants into waterways. We also can use modern techniques in hydrologic modeling and geochemical evaluation to lessen the potential for agricultural tail water to move into sensitive aquatic areas, to mitigate the potential for drought-influenced excessive pumping of groundwater to force the movement of contaminants such as salts into high quality groundwater environments, and to limit conditions that may cause land subsidence to occur from over-pumping. And we need to put greater awareness on the impact of drought-induced air quality degradation – that is, the greater tendency of effusive fine particulate matter to become airborne during periods of land drying or lake level reduction during drought.

California has put in place numerous laws and regulations related to groundwater sustainability, watershed management, and environmental protection to help moderate the challenges of severe drought. However, with an environment and economy so influenced by reliance on secure and consistent water supply, and with predictions of long-term climate trends that point to a reduced snowpack and increased hydrologic vulnerabilities in future years[11] we must rely more on our technical knowhow to help understand and adapt to our hydrologic conditions with approaches that benefit, and do not distract, from the collective need to protect environmental, economic, and societal concerns. The situation is critical, but California has built itself on innovation, and by connection, the U.S. and perhaps the world, requires California to be successful, prosperous, and ingenious in handling adversity. 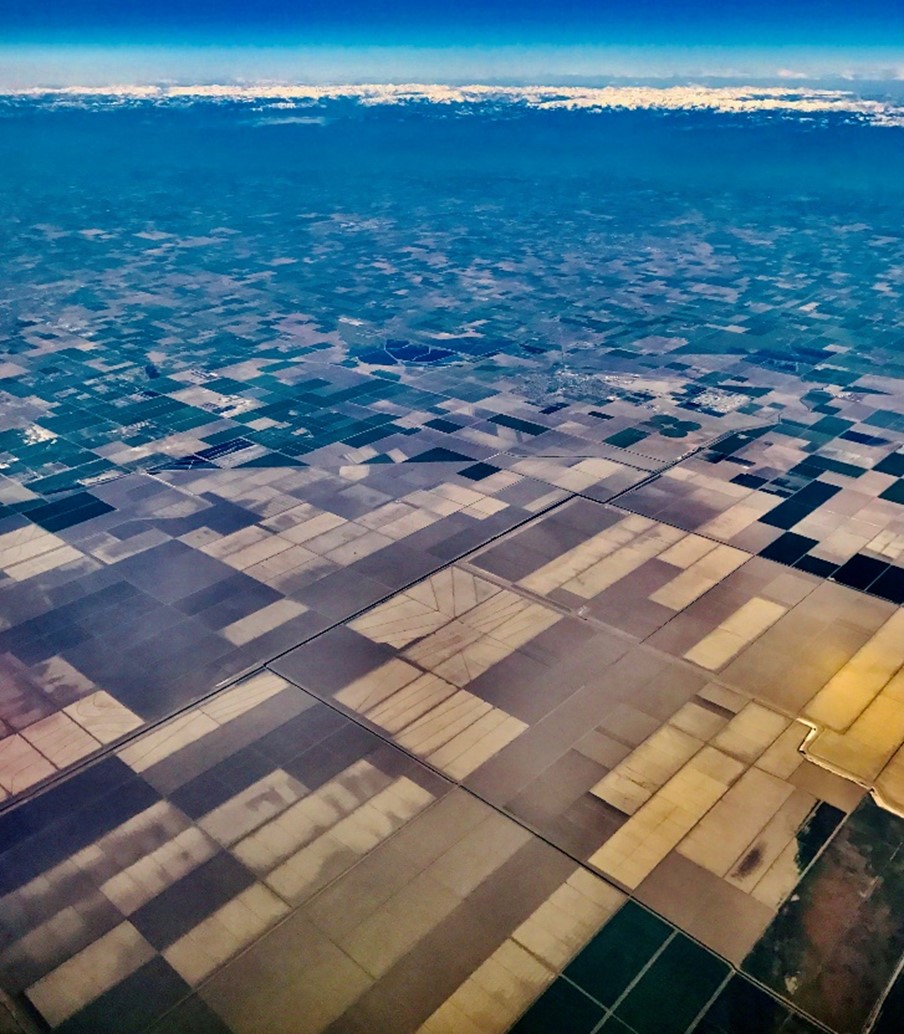 Drought is a way of life and is not new to California; and in fact, drought is not new to any geographic location in the United States including the Hawaiian Islands[12] and even the southeastern U.S. which suffered a deep drought during the 2006-2009 timeframe[13]. The recent 2012-2016 California drought was broad and deep and brought on soil moisture deficit conditions reportedly with a frequency of only once for every 1200 years[14]. Are we on a similar trend, or are we merely within a multi-generational drought punctuated every few years by a short-duration wet period? The point is that our perspective is often limited to the specific issue we are most familiar with and it behooves us to utilize the bevy of scientific resources and policy information available to help us successful manage the multitude of complex matters at play during these conditions. Numerous resources for California water matters include, but are not limited to:

Here at BBJ Group we will continue to work within this space and every month, will share new information, ideas, and resources intended to benefit those with interest in these matters. So rather than feeling a sense of “déjà vu all over again,” let’s focus on “California Here I Come” as the theme to renew our collective call for developing new ways to tackle an old but growing problem, and do so with vigor, invention, creativity and resolve the way we know best here in the Golden State.