Listen to our webinar on the PFAS family of compounds held April  9, 2019. It covers:

By entering your email address, you expressly consent to receive other BBJ resources and materials.

PFAS - A family of compounds

Per- and polyfluoroalkyl substances (PFAS) are a family of compounds historically used as water and stain repellants, fire suppressants and nonstick coatings, among other uses. Emerging research into the toxicology and chemical fate and transport of these compounds is raising serious red flags by scientists and regulators.

Many state and federal agency websites indicate that the PFAS family includes about 3,000 individual manufactured chemicals; however, some experts believe that the actual number of PFAS compounds may exceed many times that amount if environmental intermediates (i.e., compounds produced as the original chemicals transform in the environment) are included in the total. 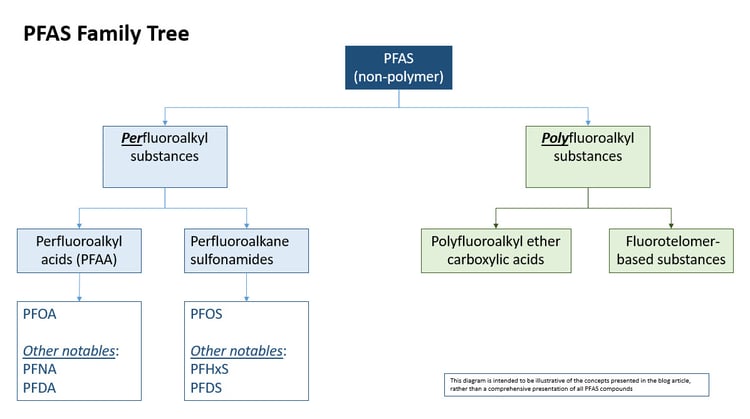 The fluorinated part of the molecule is what makes this class of substances effective as stain repellant or nonstick coatings, as well as in fire suppressants. Generally, the functional group makes the molecules more water-soluble than they “should be” given the rest of their structure. These functional groups further segregate compounds within the PFAS family tree, but we can leave that for another article.

Are Fluorotelomers the Next Wave of PFAS Regulation?

Why does it matter?

The most toxic and bioaccumulative chemicals don't really move in the environment, right?

Generally accurate, but not so with PFAS. It’s true that the action levels for PFAS compounds are extraordinarily low due to their toxicity. These action levels are comparable to other known classes of highly toxic compounds, such as polychlorinated biphenyl (PCBs) and dioxin. PCBs and dioxin are very insoluble and, as a result, are generally immobile in the environment; however, PFAS are relatively soluble by comparison because of those functional groups.

As a result, PFAS compounds are capable of migrating widely via groundwater, unlike other similarly toxic compounds. Interestingly, a primary long-term groundwater contaminant source of PFAS in the subsurface is the vadose zone. (More on that in a future paper.) All of this makes PFAS fairly unique for remediation practitioners and makes investigations and risk evaluations complex.

Trucking Facility-Remediation Project
As part of a property and asset acquisition, BBJ Group completed a Phase I ESA, Phase II ESA, Baseline Environmental Assessment (BEA) and a Due Care Plan for a commercial trucking facility in Muskegon, Michigan.  The results of the Phase I ESA concluded that the property had historically operated as a plating company.  In BBJ Group’s experience, and as documented by the ITRC, plating operations are a major contributing source of per- and polyfluoroalkyl substances (PFAS). Based on historical operations at the property, BBJ Group included the investigation of Perfluorooctanoic acid (PFOA) and perfluorooctane sulfonate (PFOS) as part of the Phase II ESA.  A total of two irrigation wells were sampled and analyzed for PFOA and PFOS.   Concentrations of PFOA and PFOS were compared to the Michigan Department of Environment, Great Lakes and Energy (EGLE) drinking water criterion and were detected below the applicable screening levels. BBJ Group completed a BEA on behalf of the client in order to seek liability protection from existing groundwater contamination on the site. The scale of work completed by our professionals encompasses industrial sites ranging from less than an acre with a handful of samples, to mining projects encompassing hundreds of acres and including multiple groundwater, soil and sediment samples
PFAS the Forever Chemical

Currently, there are no federal cleanup standards for PFAS in soil or groundwater. States are filling that gap, albeit in an inconsistent way. State cleanup objectives are largely focused on perfluorinated PFAS compounds, as they are known to be the most toxic compounds in the PFAS family. However, as researchers learn more about the transport and fate of PFAS compounds in the environment, a broader suite of PFAS may become important in site investigations.

Groundwater Remediation Project
BBJ Group was retained by a client who was considering acquiring an industrial facility in the southeast U.S. The facility was remediating groundwater (pursuant to RCRA Corrective Action) via extraction and granular activated carbon treatment with discharge to the local wastewater treatment plant (WWTP). BBJ Group discovered that the state regulatory agency had recently requested that certain nearby municipal wastewater treatment systems sample wastewater influent for emerging contaminants, including per- and poly-fluoroalkyl substances (PFAS), with an emphasis on the chemicals perfluorooctanoic acid (PFOA) and perfluorooctanesulfonic acid (PFOS). Although PFAS were not contaminants of concern for RCRA Corrective Action, it was determined that they would likely be added in the future. In response, BBJ Group prepared an Opinion of Costs for modification of the groundwater extraction and treatment system to address PFAS.
How New Jersey's PFAS Regulations Affect Sites Enrolled in SRP

Well, that makes sense. Or does it?

Need help with a PFAS site or project? Contact our experts.

Listen to our webinar on the PFAS family of compounds held April  9, 2019. It covers:

Get your copy today.

By entering your email address, you expressly consent to receive other BBJ resources and materials.